EBOOK: With the Old Breed by Eugene B. Sledge 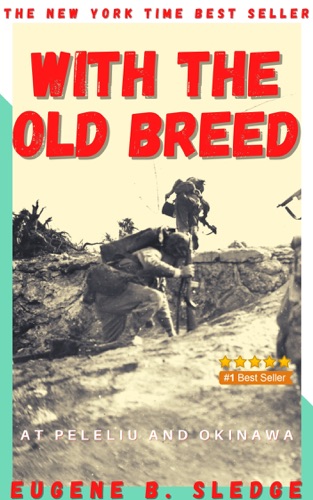 NEW YORK TIMES BESTSELLER
In his own book, Wartime, Paul Fussell called With the Old Breed "one of the finest memoirs to emerge from any war." John Keegan referred to it in The Second World War as "one of the most arresting documents in war literature." And Studs Terkel was so fascinated with the story he interviewed its author for his book, "The Good War." What has made E.B. Sledge's memoir of his experience fighting in the South Pacific during World War II so devastatingly powerful is its sheer honest simplicity and compassion.
Now including a new introduction by Paul Fussell, With the Old Breed presents a stirring, personal account of the vitality and bravery of the Marines in the battles at Peleliu and Okinawa. Born in Mobile, Alabama in 1923 and raised on riding, hunting, fishing, and a respect for history and legendary heroes such as George Washington and Daniel Boone, Eugene Bondurant Sledge (later called "Sledgehammer" by his Marine Corps buddies) joined the Marines the year after the bombing of Pearl Harbor and from 1943 to 1946 endured the events recorded in this book. In those years, he passed, often painfully, from innocence to experience.

Sledge enlisted out of patriotism, idealism, and youthful courage, but once he landed on the beach at Peleliu, it was purely a struggle for survival. Based on the notes he kept on slips of paper tucked secretly away in his New Testament, he simply and directly recalls those long months, mincing no words and sparing no pain. The reality of battle meant unbearable heat, deafening gunfire, unimaginable brutality and cruelty, the stench of death, and, above all, constant fear. Sledge still has nightmares about "the bloody, muddy month of May on Okinawa." But, as he also tellingly reveals, the bonds of friendship formed then will never be severed.

Sledge's honesty and compassion for the other marines, even complete strangers, sets him apart as a memoirist of war. Read as sobering history or as high adventure, With the Old Breed is a moving chronicle of action and courage.