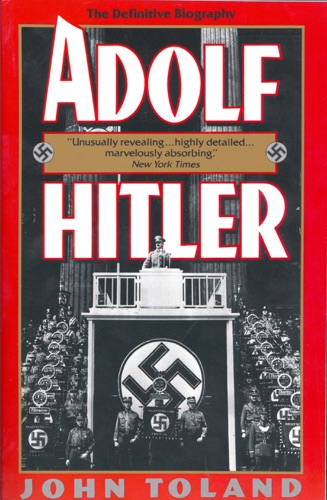 Pulitzer Prize-winning historian John Toland’s classic, definitive biography of Adolf Hitler remains the most thorough, readable, accessible, and, as much as possible, objective account of the life of a man whose evil affect on the world in the twentieth century will always be felt.

Toland’s research provided one of the final opportunities for a historian to conduct personal interviews with over two hundred individuals intimately associated with Hitler. At a certain distance yet still with access to many of the people who enabled and who opposed the führer and his Third Reich, Toland strove to treat this life as if Hitler lived and died a hundred years before instead of within his own memory. From childhood and obscurity to his desperate end, Adolf Hitler emerges , in Toland’s words, "far more complex and contradictory . . . obsessed by his dream of cleansing Europe Jews . . . a hybrid of Prometheus and Lucifer."