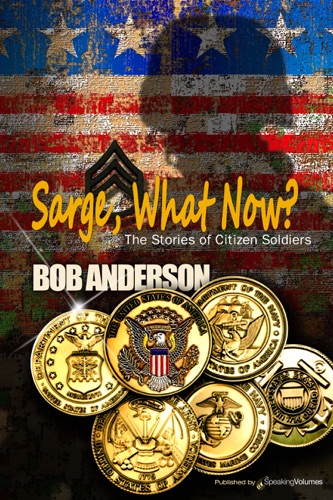 Written and compiled by the son of a World War II infantryman who was awarded the Silver Star, Sarge, What Now? is partly autobiographical, partly historical, often irreverent and sometimes politically incorrect.

Bob Anderson, CMSgt, USAFR (Ret) addresses important subjects such as the role of the NCO, the Officer/NCO relationship, leadership and followership. He provides history and insight into what it means to become an NCO and progress through the ranks to the highest NCO rank, E-9; and how Commanders can develop their NCOs to their optimum abilities.

Sarge, What Now? also honors the seldom understood and often under-appreciated G.I. with their own stories of humor, old scars, past enemies and the brotherhood only shared by those that “have been there, done that!”

Whether you spent 30 years or 30 days in uniform, there is a story for you. If you have a family member that served, their service had impact on you. If happenstance forced you to be part of history or you're just a student of it, you may find a different perspective of what you think you know about the military.

The author says, “The story of America has been colored by the stories of her Citizen Soldiers; those that served on active duty or in the Reserve or in the Guard. They may have served in peacetime or in time of war. Their service changed them forever.”

“It makes no difference which branch of the military a veteran served in or whether they ever fired a shot in anger; whether they were a hero with a medal or a hero that simply did his or her duty—they were and are heroes in my book; and this book tells some of their stories.”