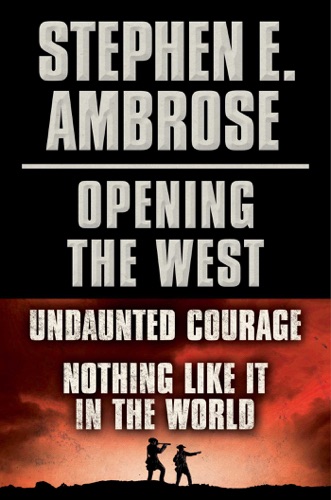 This ebook box set includes the following books by Stephen E. Ambrose, focusing on the ingenuity and the hardships that shaped the American West:

Undaunted Courage: This #1 New York Times bestseller gives a sweeping account of the most momentous expedition in American history. Ambrose follows the Lewis and Clark Expedition from Thomas Jefferson's hope of finding a waterway to the Pacific, through the heart-stopping moments of the actual trip, to Lewis's lonely demise on the Natchez Trace. Along the way, Ambrose shows us the American West as Lewis saw it—wild, awesome, and pristinely beautiful.

Nothing Like It in the World: A riveting account of an unprecedented feat of engineering, vision, and courage—this is the story of the men who built the transcontinental railroad. The US government pitted two companies—the Union Pacific and the Central Pacific Railroads—against each other in a race for funding, encouraging speed over caution, and their race brilliantly comes to life in Ambrose’s telling of the investors who risked their businesses and money; the enlightened politicians who understood its importance; the engineers and surveyors who risked, and sometimes lost, their lives; and the Irish and Chinese immigrants, the defeated Confederate soldiers, and all the laborers who did the backbreaking and dangerous work on the tracks.