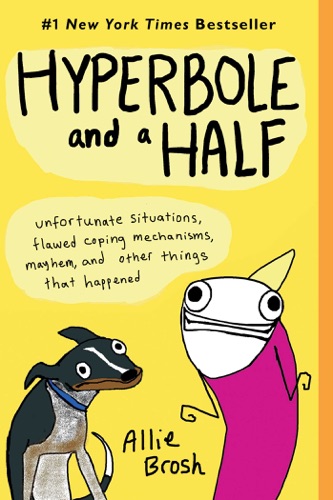 “Funny and smart as hell” (Bill Gates), Allie Brosh’s Hyperbole and a Half showcases her unique voice, leaping wit, and her ability to capture complex emotions with deceptively simple illustrations.

FROM THE PUBLISHER:
Every time Allie Brosh posts something new on her hugely popular blog Hyperbole and a Half the internet rejoices.

This full-color, beautifully illustrated edition features more than fifty percent new content, with ten never-before-seen essays and one wholly revised and expanded piece as well as classics from the website like, “The God of Cake,” “Dogs Don’t Understand Basic Concepts Like Moving,” and her astonishing, “Adventures in Depression,” and “Depression Part Two,” which have been hailed as some of the most insightful meditations on the disease ever written.

Brosh’s debut marks the launch of a major new American humorist who will surely make even the biggest scrooge or snob laugh. We dare you not to.

FROM THE AUTHOR:
This is a book I wrote. Because I wrote it, I had to figure out what to put on the back cover to explain what it is. I tried to write a long, third-person summary that would imply how great the book is and also sound vaguely authoritative—like maybe someone who isn’t me wrote it—but I soon discovered that I’m not sneaky enough to pull it off convincingly. So I decided to just make a list of things that are in the book:

*These are lies. Perhaps I have underestimated my sneakiness!