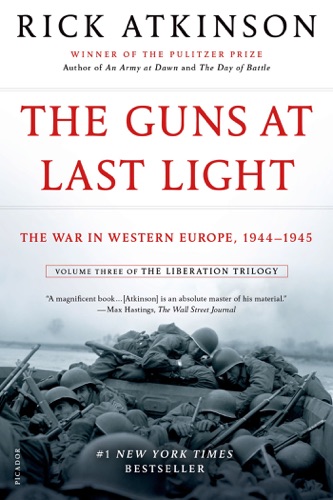 It is the twentieth century's unrivaled epic: at a staggering price, the United States and its allies liberated Europe and vanquished Hitler. In the first two volumes of his bestselling Liberation Trilogy, Rick Atkinson recounted how the American-led coalition fought through North Africa and Italy to the threshold of victory. Now, in The Guns at Last Light, he tells the most dramatic story of all—the titanic battle for Western Europe.

D-Day marked the commencement of the final campaign of the European war, and Atkinson's riveting account of that bold gamble sets the pace for the masterly narrative that follows. The brutal fight in Normandy, the liberation of Paris, the disaster that was Operation Market Garden, the horrific Battle of the Bulge, and finally the thrust to the heart of the Third Reich—all these historic events and more come alive with a wealth of new material and a mesmerizing cast of characters. Atkinson tells the tale from the perspective of participants at every level, from presidents and generals to war-weary lieutenants and terrified teenage riflemen. When Germany at last surrenders, we understand anew both the devastating cost of this global conflagration and the enormous effort required to win the Allied victory.
With the stirring final volume of this monumental trilogy, Atkinson's accomplishment is manifest. He has produced the definitive chronicle of the war that unshackled a continent and preserved freedom in the West.
One of The Washington Post's Top 10 Books of the Year
A Kirkus Reviews Best Nonfiction Book of 2013