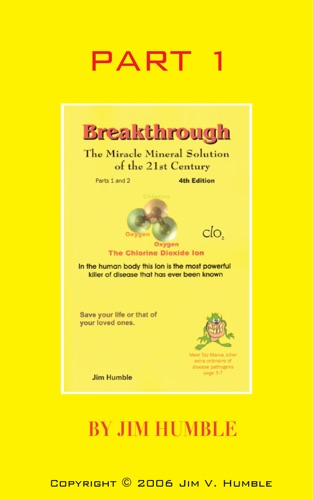 First published in 2006 this book ranks among the most read books in the world. Over 3 million downloads have gone out from thousands of web sites. Over 4,000 web site owners are “friends of MMS” and they provide free copies to anyone who asks for it. The original copyright statement remains unchanged. As of June, 2009, Jim Humble became a perpetual traveler and his work continues in Africa and other countries.

The links within the original book version gradually became obsolete or broken. Therefore a table has been placed at the end of the book which lists Internet resources – recent educational materials that have been written mostly by Jim since June 2009. They are updated frequently and are listed at the end of this book.

The world-wide Flu Pandemic announced by the World Health Organization has caused numerous health web sites in the U.S. to be brought off-line. This is based on U. S. Congress openly supporting arrests and fines against persons and organizations that promote alternative remedies for flu and Influenza other than those approved by the World Health Organization. Vaccinations and Tamiflu or other approved antibiotics are said to be the only legitimate means of reducing flu symptoms. At the time of writing, most web sites located in non-US countries still provide MMS information as listed at the end of volume one.

Viewed as a classic work this book stands as the authentic history of how ClO2 came to the front as the most potent and powerful germicidal agent on the planet. Jim explains how activated MMS cannot harm normal living body cells. His contribution was that he found the best way to package MMS as a safe affordable product, and to test it for five years to prove reliable outcomes. His discovery is now used daily by more than a million people around the world, not including dogs, cats, horses, and other animals. All this since 2006 when MMS was introduced along with this book.

MMS suppliers are no longer listed or identified because search engines provide that information quite effectively. Disinformation on the Internet states that MMS (and the ClO2 that it generates) is the same as chlorine and therefore it is dangerous. That is not true. Chlorine dioxide has been well known in industry for 70 years. Chlorine Dioxide is even an approved food additive at food-packaging time because it destroys salmonella, e- coli, and every other known germ – eventually converting into molecules of water as it disappears.

MMS was developed and tested by Jim between 2001 and 2006, involving over 75,000 volunteers in five different countries. This is the story of those years and the events that led to standardization of the current MMS product.

New protocols and methods for using MMS have evolved in the years since the release of this book. The latest discoveries and innovations are described in the links at the end of the book. Disregard links within the book – they are now obsolete.