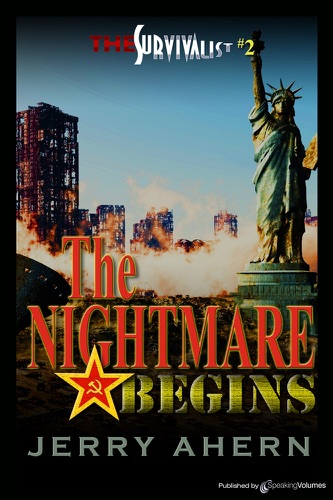 World War III is now a bloody page in American history. With nuclear holocaust killing more than a quarter-billion people worldwide and the United States just a memory, John Thomas Rourke, ex-CIA Cover Operations Officer, weapons expert, and survival authority is enduring the ultimate test. Soviet Occupation Forces have landed and must begin the "pacification" of America. They will start by liquidating any prominent Americans who could become a rallying point for armed resistance. The first name on the list is Samuel Chambers, the lone surviving member of the Presidential cabinet. And as the American KGB invades Texas to find Chambers, they find Rourke there as well. With his young friend Paul Rubenstein, Rourke is fighting his way back home to continue the search for his missing wife and children. Paramilitary armies, heavily armed brigands, a beautiful KGB infiltrator, an unending stream of War refugees, and a land gone mad with violence block his path. The birth of the U.S. II has begun and the quest continues for John Thomas Rourke - THE SURVIVALIST.