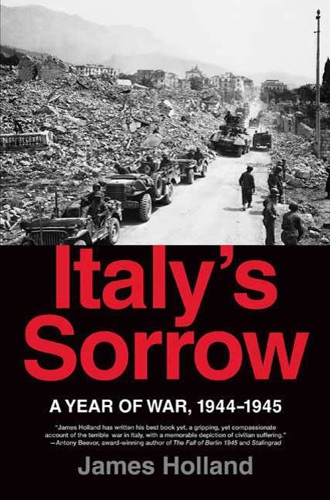 During the Second World War, the campaign in Italy was the most destructive fought in Europe - a long, bitter and highly attritional conflict that raged up the country's mountainous leg. For frontline troops, casualty rates at Cassino and along the notorious Gothic Line were as high as they had been on the Western Front in the First World War. There were further similarities too: blasted landscapes, rain and mud, and months on end with the front line barely moving.

And while the Allies and Germans were fighting it out through the mountains, the Italians were engaging in bitter battles too. Partisans were carrying out a crippling resistance campaign against the German troops but also battling the Fascists forces as well in what soon became a bloody civil war. Around them, innocent civilians tried to live through the carnage, terror and anarchy, while in the wake of the Allied advance, horrific numbers of impoverished and starving people were left to pick their way through the ruins of their homes and country. In the German-occupied north, there were more than 700 civilian massacres by German and Fascist troops in retaliation for Partisan activities, while in the south, many found themselves forced into making terrible and heart-rending decisions in order to survive.

Although known as a land of beauty and for the richness of its culture, Italy's suffering in 1944-1945 is now largely forgotten. Italy's Sorrow by James Holland is the first account of the conflict there to tell the story from all sides and to include the experiences of soldiers and civilians alike. Offering extensive original research, it weaves together the drama and tragedy of that terrible year, including new perspectives and material on some of the most debated episodes to have emerged from World War II.