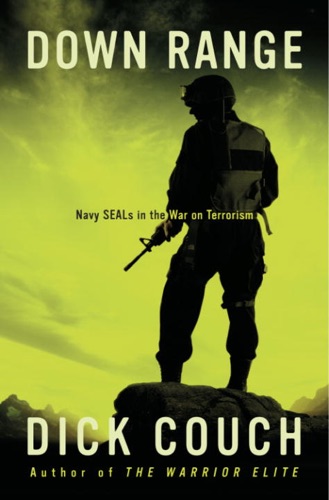 In America’s battle against global terrorism, the goal of the Navy SEALs is to be the best guns in the fight—stealthy, effective, professional, and lethal. Here for the first time is a SEAL insider’s battle history of these Special Operations warriors in the war on terrorism.

“Down range” is what SEALs in Afghanistan and Iraq call their area of operations. In this new mode of warfare, “down range” can refer to anything from tracking roving bands of al-Qaeda on a remote mountain trail in Afghanistan to taking down an armed compound in Tikrit and rousting holdouts from Saddam Hussein’s regime. It could mean interdicting insurgents smuggling car-bomb explosives over the Iraqi-Syrian border or silently boarding a freighter on the high seas at night to enforce an embargo. In other words, “down range” could be anywhere, anytime, under any conditions.

In Down Range, author Dick Couch, himself a former Navy SEAL and CIA case officer, uses his unprecedented access to bring the reader firsthand accounts from the warriors in combat during key missions in Afghanistan and Iraq. Couch creates a pulse-pounding, detailed narrative of the definitive engagements of this war, while painting an unusually intimate portrait of these warriors in the field. The performance of the SEALs in difficult, changing environments—in the heat of the Afghan desert, in the snow-packed Hindu Kush, on the high seas, and in the urban chaos of Baghdad—has been nothing short of extraordinary. The SEALs, coordinating with other American forces, the CIA, and foreign special operations units like the Polish GROM, have once more shown their genius for improvisation and capacity for courageous action in leading the fight against this new and vicious enemy.

The first battle history of its kind, Down Range is a riveting close-up of some of America’s finest warriors in action against a deadly foe.