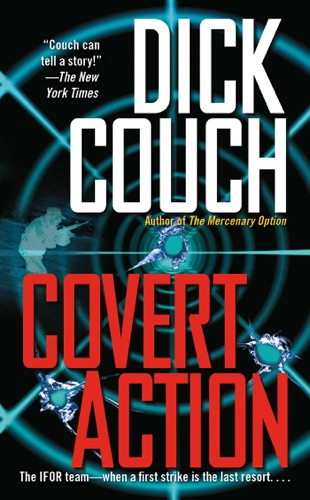 First there was The Mercenary Option. Now IFOR, the surgical strike team led by former Navy SEAL Garrett Walker, returns in an explosive adventure charged with authenticity and suspense.
COVERT ACTION
Formed by a wealthy industrialist after the terror attacks on American soil, the Intervention Force is a professional strike team called in on missions others can't -- or won't -- undertake. IFOR has already defused a seemingly impenetrable scheme for nuclear annihilation; now they are called into one of the world's hottest zones. In the Zimbabwean province of Tonga, an outbreak of hemorrhagic fever has U.S. officials on the alert for bioterrorism. Walker leads his Black Ops team into the heart of danger in the African nation to unhinge the workings of two terrorist kingpins -- the brilliant Russian Pavel Zelinkow and Al Qaeda mastermind Abu Musab al-Zarqawi -- before a cataclysm is unleashed on an unsuspecting world.
For "hard-as-nails adventure that will keep you riveted to your chair" (Stephen Coonts), delve into the IFOR novels from Dick Couch.