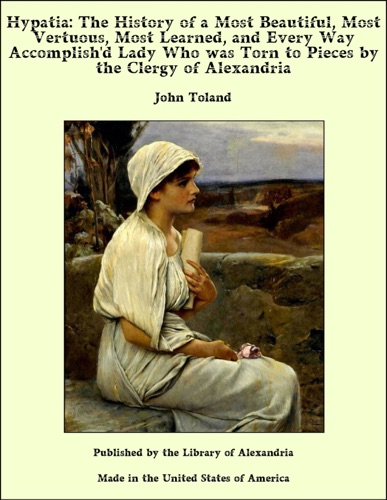 A general Character of the Lady; the Contrivers and Executioners of the Barbarities which she suffered; and the Authorities from whence this Story is extracted.
I am going to give a short Account, but as full as antient Books afford us Materials, of the Life and Death of Hypatia; who will ever continue the Glory of her own Sex, and the Disgrace of ours: For the Women have no less Reason to value themselves, that there existed a Lady of such rare Accomplishments, without the least Blemish, even as a Foil to her numberless Perfections; than the Men to be ashamed, that any could be found among them of so brutal and savage a Disposition, as, far from being struck with Admiration at so much Beauty, Innocence, and Knowledge, to stain their barbarous Hands with her Blood, and their impious Souls with the indelible Character of sacrilegious Murderers. A Bishop, a Patriarch, nay, a Saint, was the Contriver of so horrid a Deed, and his Clergy the Executioners of his implacable Fury. The Authors out of whom I collect my Account (and I omit none that has come to my Knowledge) were either her Contemporaries, or lived near that Age. One of them was her School-fellow, another her Scholar. But they who relate the most odious and flagitious Circumstances, are Ecclesiastical Historians; counted orthodox in their own Time, as well as eminently so by most in ours. Nor ought we to forget that several of them were Priests. To every one of them we shall do the Justice that their Sincerity or Prevarication deserves, though little remains to do in this respect; all being agreed about the principal Facts, and some differing only in Points of no great Importance. They are such Things, as, taken either Way, neither serve much to alleviate a very bad Cause, nor to aggravate what cannot be possibly made worse.