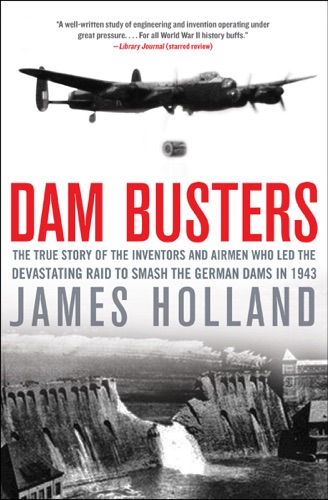 The story of the British-made bombs, Upkeep and Highball, successfully dropped on Nazi dams “has never been told in such depth before” (Daily Mail, UK).

The night of May 16, 1943: Nineteen specially adapted Lancaster bombers take off from an RAF airfield in Lincolnshire, England, each with a huge nine-thousand-pound cylindrical bomb strapped underneath it. Their mission: to destroy three hydroelectric dams that power the Third Reich’s war machine.

It was a suicide mission from the outset. First the men had to fly extremely low, at night, and in tight formation over miles of enemy-occupied territory. Then they had to drop with pinpoint precision a complicated spinning cylindrical bomb that had never before been used operationally. More than that, the entire operation had to be put together in less than ten weeks in order to hit the dams when water levels were still high enough for the bombs to be effective.

The visionary aviation engineer Barnes Wallis hadn’t even drawn up plans for his concept when the bouncing bomb was green-lighted. What followed was an incredible race against time that, despite numerous setbacks, became one of the most successful and significant bombing raids of all time. “Holland has delved into the new trove” of declassified documents “to shed light on this weapons program, the politics of its development and the eventual mission” (The Wall Street Journal).

“An impeccably researched work in the style of a fast-paced techno-thriller.” —Publishers Weekly