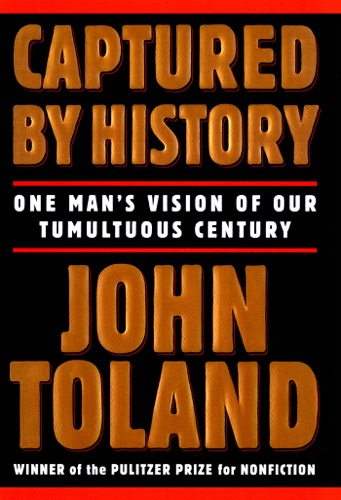 Captured by History is an autobiography like none other, for few historians have interviewed as many men and women who helped shape the most momentous events of our century than John Toland. Here, for the first time, Toland reveals how he found these key players and how he persuaded them to talk to him. From disgraced Japanese generals to the German doctor who nearly succeeded in assassinating Hitler, Toland's sources are remarkable for what they reveal about their subjects, along with the secrets and stories they would tell no one else.

Toland's unorthodox approach to history came from his early desire to be a playwright. Even before graduating from Williams College during the depths of the Depression, Toland spent his summers hitchhiking and riding the rails as a hobo. He lived and worked with other bindle stiffs, learning their lingo and ways. He served five short jail sentences for riding freights and trespassing. His experiences and the characters he met encouraged Toland to write plays and early novels (unsuccessfully) until 1957, when he published his first book, Ships in the Sky.

His work in the next four decades was nothing short of extraordinary, for Toland found that he saw history as a play, with narrative structure and drama, not as a dry series of dates and names. The result was a series of landmark works such as Infamy; The Rising Sun, which won him the Pulitzer Prize for nonfiction in 1970 and reflected his ability, with the help of his Japanese wife, to open doors normally closed to Westerners in Japan; In Mortal Combat; The Last 100 Days; and his best-selling biography of Adolf Hitler.

Captured by History is not only the summation of a lifetime of groundbreaking works, but the story of a man who through his historical investigations became a witness to many of the most catastrophic events of the twentieth century. A self-effacing man in person, Toland nonetheless comes across as having had a life as fascinating as the lives of the many historical figures he has interviewed. Written by one of our last witnesses to the terrible and deracinating conflicts that split the world asunder at mid-century, Captured by History is an astonishing personal story of a hugely inquisitive man who became a historian not by accident or design, but by fate; a man who succeeded in chronicling the most tumultuous events of our century.