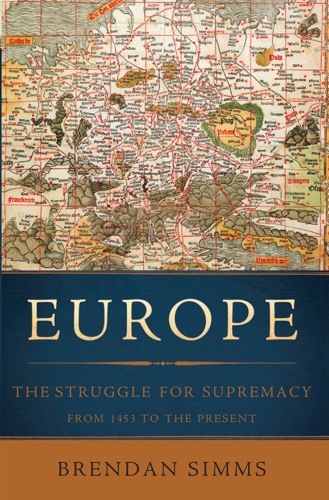 With "verve and panache," this magisterial history of Europe since 1453 shows how struggles over the heart of the continent have shaped the world we live in today (The Economist).

Whoever controls the core of Europe controls the entire continent, and whoever controls Europe can dominate the world. Over the past five centuries, a rotating cast of kings, conquerors, presidents, and dictators have set their sights on the European heartland, desperate to seize this pivotal area or at least prevent it from falling into the wrong hands. From Charles V and Napoleon to Bismarck and Cromwell, from Hitler and Stalin to Roosevelt and Gorbachev, nearly all the key power players of modern history have staked their titanic visions on this vital swath of land.

In Europe, prizewinning historian Brendan Simms presents an authoritative account of the past half-millennium of European history, demonstrating how the battle for mastery of the continent's center has shaped the modern world. A bold and compelling work by a renowned scholar, Europe integrates religion, politics, military strategy, and international relations to show how history -- and Western civilization itself -- was forged in the crucible of Europe.