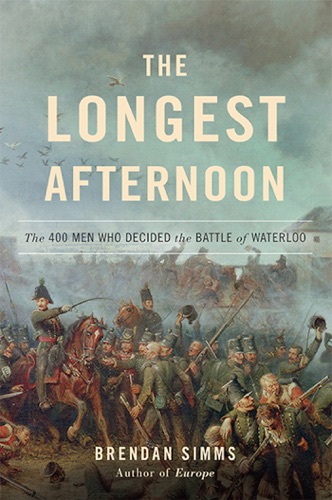 From the prizewinning author of Europe, a riveting account of the heroic Second Light Battalion, which held the line at Waterloo, defeating Napoleon and changing the course of history.

In 1815, the deposed emperor Napoleon returned to France and threatened the already devastated and exhausted continent with yet another war. Near the small Belgian municipality of Waterloo, two large, hastily mobilized armies faced each other to decide the future of Europe-Napoleon's forces on one side, and the Duke of Wellington on the other.

With so much at stake, neither commander could have predicted that the battle would be decided by the Second Light Battalion, King's German Legion, which was given the deceptively simple task of defending the Haye Sainte farmhouse, a crucial crossroads on the way to Brussels. In The Longest Afternoon, Brendan Simms captures the chaos of Waterloo in a minute-by-minute account that reveals how these 400-odd riflemen successfully beat back wave after wave of French infantry. The battalion suffered terrible casualties, but their fighting spirit and refusal to retreat ultimately decided the most influential battle in European history.