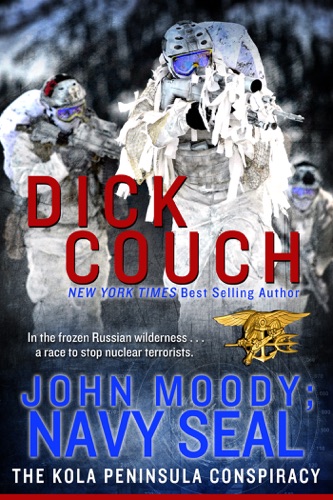 John Moody is typical of his breed–only maybe a little more so.  He grew up ranch tough on a small cattle spread in Wyoming.  A pair of gifted hands and the ability to run precise routes sent him to college on a football scholarship–saving him from a punishing life on the rodeo circuit.  In college he played wide-receiver and partied a lot.  Now he is a Navy SEAL.  A hard calling but then he was hard long before rode broncs, played football, or before he arrived for SEAL training in Coronado.  With the Berlin Wall down and the Cold War cooling off, there was little work for this young SEAL lieutenant.  So he partied on–until the Kola mission tasking.
In the far reaches of the Northern Military District, a Russian general is trying to keep his underpaid and under-equipped forces intact and battle ready.  To do this he is reconfiguring tactical nuclear warheads and selling them on a cash-and-carry basis.  And America’s newest adversary, the Islamic extremists, desperately want them–as do militant nations like Iran.  The CIA has indications but no proof that this is taking place.  The proof America needs is in the hands of a well-placed agent in this same general’s forces.  That agent has gone silent.  In order to reestablish contact and to document this rogue nuclear auction, a team of Navy SEALs trained in winter warfare is sent secretly into northern Russia–to the frigid Kola Peninsula.  And that team is headed by John Moody.  In a heartbeat, this freewheeling, party boy is in the middle of a difficult special-operations mission with strategic national significance.

PRAISE FOR THE NOVELS BY DICK COUCH
“The complex plot never seems contrived, thanks to the author’s careful attention to the human dimession.” –Publishers Weekley
“A gripping insiders’s view of the secret world of nuclear security, counterterrorism, and post-Cold War international conflict.” –W.E.B. Griffin
“Great entertainment . . . A hard-as-nails action-adventure that will keep you riveted to your chair” –Stephen Coonts
“All-action . . . Clancy-like accuracy . . . He commands comfortably right through to the climactic firefight” –Booklist
“Mr. Couch can tell a story.” –New York Times Book Review

About the Author
A 1967 graduate of the U.S. Naval Academy, Dick Couch served as a Surface Warfare Officer and a Special Warfare Officer. While a platoon leader with SEAL Team One in 1970, he led one of the only successful POW rescue operations of the Vietnam War. On release from active duty in 1972, he entered the Central Intelligence Agency, where he served as a Maritime Operations Case Officer. Dick retired from the Naval Reserve in 1997 with the rank of captain and has served as professor at the U.S. Naval Academy and an advisor on military and tactical ethics for the component commands of the US Special Operations Command. A New York Times Bestselling Author, he has twenty-one titles to his credit.