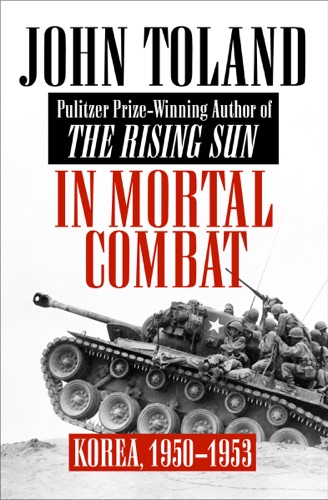 A history of the Korean War with soldier’s-eye views from both sides, by the Pulitzer Prize–winning author of The Rising Sun and Infamy.

Pulitzer Prize–winning author John Toland reports on the Korean War in a revolutionary way in this thoroughly researched and riveting book. Toland pored over military archives and was the first person to gain access to previously undisclosed Chinese records, which allowed him to investigate Chairman Mao’s direct involvement in the conflict. Toland supplements his captivating history with in-depth interviews with more than two hundred American soldiers, as well as North Korean, South Korean, and Chinese combatants, plus dozens of poignant photographs, bringing those who fought to vivid life and honoring the memory of those lost.

In Mortal Combat is comprehensive in it discussion of events deemed controversial, such as American brutality against Korean civilians and allegations of American use of biological warfare. Toland tells the dramatic account of the Korean War from start to finish, from the appalling experience of its POWs to Mao’s prediction of MacArthur’s Inchon invasion.

Toland’s account of the “forgotten war” is a must-read for any history aficionado.